I must be getting old ... this kind of job used to take me a couple of hours at most. This one took a couple of days!!
While attempting to move my stern light from the pushpit to the upright tube on the Navik vane (it was being blocked by the vane) I managed to terminally destroy the light housing. In days gone by I'd cobbled it together with epoxy and liquid electrical tape, but I finally had to let it go. Besides, the lens was in two pieces and leaked salt water all over the electricl connections.


After much searching, I came up with a reasonable  replacement, made by Perko. My only beef with the design:

Who on earth uses #4 screws to attach anything ? !! 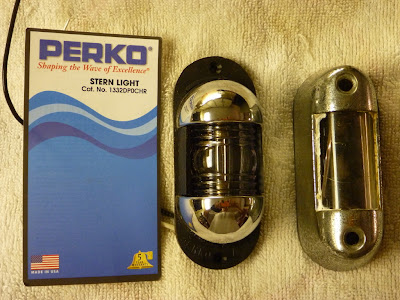 I re-drilled the mounting holes to take #6 screws, and attached the light to the Navik post, using a home-made block to transition from the round post to the flat light. Wiring was run down inside the post, through to the horizontal support, and through that into the rear cockpit locker (via the propane locker) and finally connected to the original Vega coupling in the starboard aft locker. Whew ... about two days work for something that doesn't even show, but then that was the idea :-) 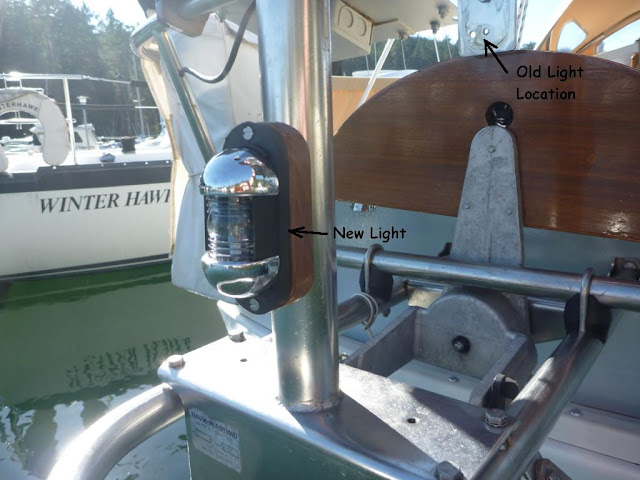 So that the old light mounting plate doesn't look naked, I used it to mount a second VHF antenna that connects to the A.I.S. receiver. It should work a lot better than the stubby antenna that I used to have on the receiver, maybe giving me earlier warning on those vessels approaching around 30 knots ;-) 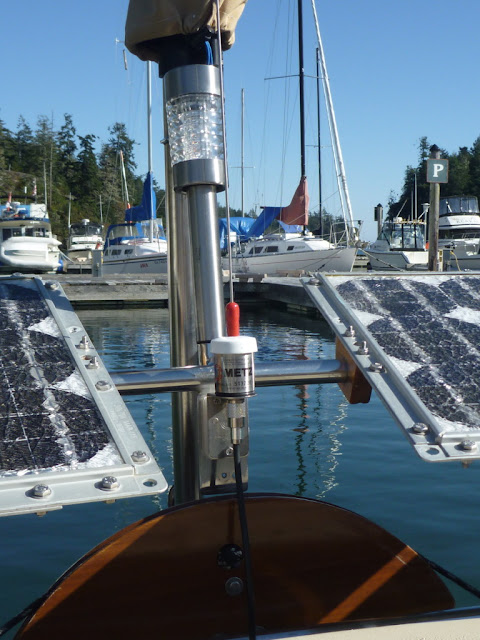 Added later:
I took my laptop down to the boat and fired up my AIS/Nav program (Memory Map Navigator). Usually, with the old AIS antenna, there would have to be traffic passing the mouth of Pedder Bay to show up on the AIS, but this time ...WoW.... within 2 minutes I had 12 targets showing, some from as far away as Port Townsend and San Juan Island.
So the external antenna, even though it's mounted on the stern rail, is a vast improvement over the short rubber one previously mounted directly on the receiver.
﻿
Posted by Mostly About Boats. at 7:52 PM