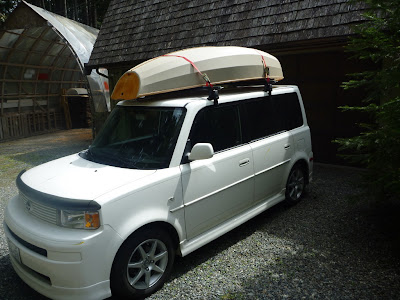 Before doing any work on the sailing rig, I felt the need to test the boat in the water to see how it handled. It weighed in at 35 lbs, a little more than the advertised 28, but that's probably because I built with oak and, ash rather than softwood. Anyway, lifting on and off the car racks was very easy! 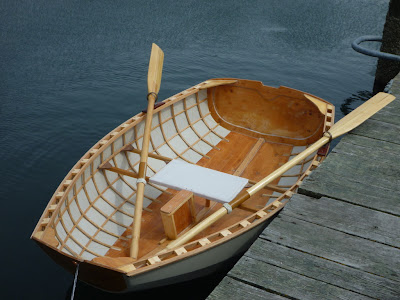 And she looked pretty in the water, too. 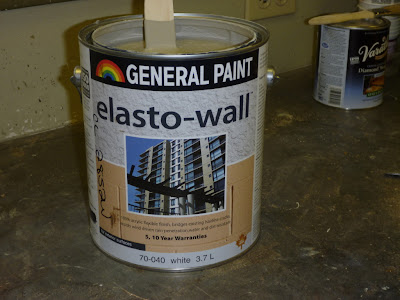 While investigating paints at a local store, I spotted a pile of cans labeled "Mis-Tints" sitting in a corner. One label that captured my attention said "Elasto Wall". Now that sounded interesting, so for $4, I took home a gallon of beige rubberized paint. 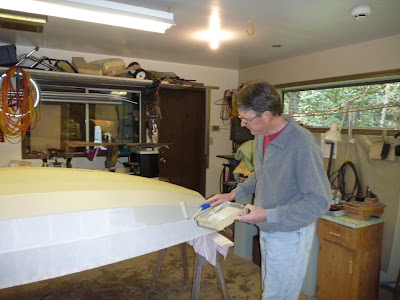 This is a water-based coating that's 45% solids, and rolls on very easily ... no smell, easy cleanup! 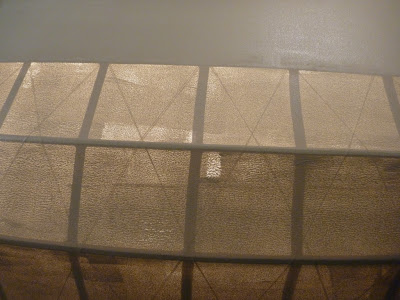 After applying the first coat I realized I should have had a light inside the hull to better monitor paint coverage and thickness.

Read more »
Posted by Mostly About Boats. at 5:35 PM No comments:

Read more »
Posted by Mostly About Boats. at 6:57 PM No comments:

A TRIP IN CHINA CLOUD: Day 2 Nanaimo to Deep Bay

Not too many pictures this day as the seas were heavy, and it was cold and wet. China Cloud logged up to 14.9 knots, surfing down the backs of the swells, as we made a good run of 40 miles! 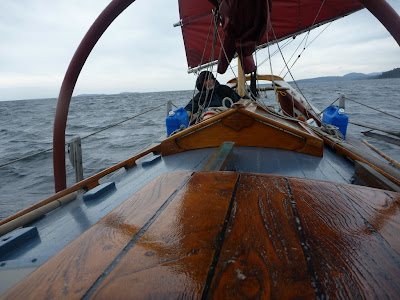 Posted by Mostly About Boats. at 10:36 AM No comments:

A TRIP IN CHINA CLOUD: Day 1 Cowichan Bay to Nanaimo. 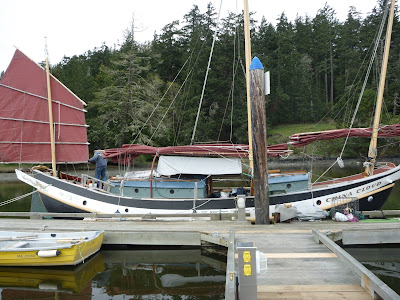 Read more »
Posted by Mostly About Boats. at 8:10 PM No comments:

I've installed a pair of weather cloths along Sin Tacha's cockpit sides to create a little more shelter in the cockpit. I had shorter ones before, lashed top and bottom to the boat and stretched nicely flat, but this time I opted to go for the "baggy" look because the way I have them fastened makes them easily removable in seconds. Being a bit baggy allows clearance around the winches, and it's easy to lower a lifeline for access to the cockpit. 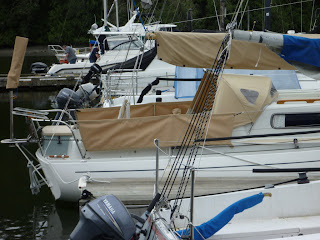 Side view, shows overall "baggy" look:
(You can see how the Dodger and sail cover material has faded in two years!)

Read more »
Posted by Mostly About Boats. at 9:07 AM No comments:

Tired of worrying about battery drain every time I turned on a cabin light, I've converted to LED's in all Sin Tacha's inside lighting, and the anchor light at the mast head.

Most of my bulbs came from LED Wholsalers  and were a lot more reasonable than many of the bulbs advertised as "marine". The marine ones may be better, but for the relatively small outlay I'm willing to experiment with the cheaper ones. It takes a little digging to find the right bulb for each purpose, but that's half the fun.

The  three dome lights have been modified to accept festoon LED bulbs.

It involved changing the socket to a festoon bulb holder, not too big a deal. 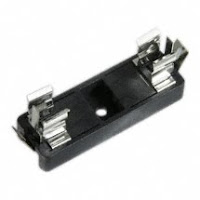 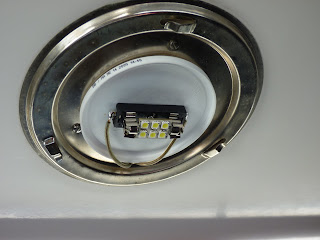 BACK ON THE BEACH: Zinc Changing

It's been a year since Sin Tacha's last haulout, a thorough one at "The Boatyard" in Sidney B.C. where she got the full treatment of power washing, fresh bottom paint, new zinc, and a professional survey.

I knew the bottom was still clean, but was concerned about the condition of the zinc on the prop shaft, so decided to use the beaching legs to check things out. The tides lined up for an April 1st event, and luckily the weather cooperated too. After careful calculation it was determined that we had to be aground by no later than 6:30 a.m.
This time I picked a small cove near the marina with a gravel beach. Previous beachings had been done in the mud, a pretty messy exercise!

The legs were attached the night before, so at 6 a.m. I motored slowly over to the cove in the dark. I'd previously set up a couple of pool noodles on shore as leading marks so as to miss some rocks on the beach. Being bright yellow, they were easily picked up with a flashlight. 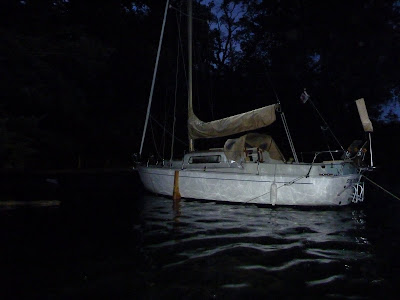 The stern anchor was dropped about 60 feet from the beach, and a bow line was dinghy'd ashore and attached to a drift log. Using the two lines to control the boat, she was pulled ahead until the front of the keel gently touched ground. With all lines made fast, it was time to relax for a while and let the moon do it's work of dropping the ocean  level by four feet. 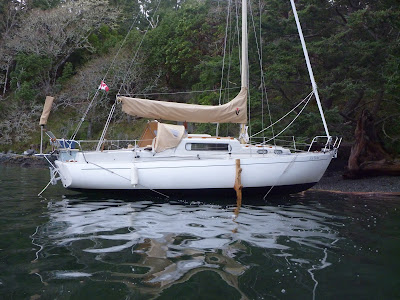 Resting easy on the gravel, while the skipper enjoys breakfast aboard: