Having the boat in the water 12 months of the year, and sailing it 12 months as well, takes it's toll on the exterior appearance.

My bottom paint is only one year old, but seems to last at least two. I'm using the same stuff I put on a boat (since sold) seven years ago that was hauled out for the first time last week. Apart from a few barnacles along the waterline, and a small family of muscles on the bottom of the keel, the paint was still working well. And the boat does not go out that often! The paint? Pettit Horizons Black. Works for me :-)

My whole flurry of boat cleaning activity was caused by the marina finally getting fresh water piped to every slip.


My 'stain-less' steel was beginning to look ugly in places, especially around the windvane, and on the bow anchor roller. The lifeline turnbuckles were getting a bit orange, too. An application of Davis FSR, allowed to work for a twenty minutes, then flushed off with water, removed all the oxidation. Some areas needed a second application, but no more than that. I found this product also takes rust spots out of Dacron sails too ... very handy.

Speaking of sails, after spending several months under a sail cover and on the furler, in various states of dampness, the dreaded green grunge was starting to appear. It was very faint, but enough to press me into action, as the sails are only a couple of years old.

There were also some ugly black mildew spots where the sail was closest to the sail cover. I had found a satisfactory recipe for Sunbrella cleaner on the Sunbrella website. They use this concoction to clean their product, and it works well for that. So I decided to try it on my sails to see if the mildew and green grunge could be persuaded to find another home.

I don't normally like using bleach on anything, but sometimes it's the only stuff that will get things off. Years ago I bought an older boat with some really ugly old sails that were very soiled. I filled a 45 gallon drum with water, added a gallon of bleach, then let the sails soak for about a week.

When I took the lid off the barrel I was surprised to see how clean and white they were. There were still some rust stains, and some other marks of unknown origin, but after a good rinse and air drying, and a little sewing, they held up well for another full season of hard use.


I read somewhere that bleaching sails ruins the thread, as it removes the "protective coating". As far as I know, the thread is 100% polyester, and the only coating is the one used to make it easier to sew with. Neither the Dacron nor the stitching on the above sails seemed to be affected at all. 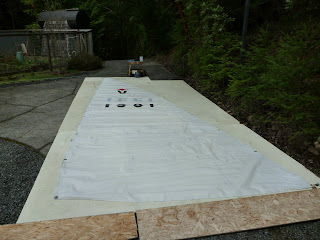 Anyway, ten sheets of old 1/4" plywood were laid out on the driveway, the sails spread out, soaked, scrubbed, and rinsed, then hung in the Stimson Shed to dry.


They're back on the boat now, looking good for the upcoming season. Time to go sailing !! 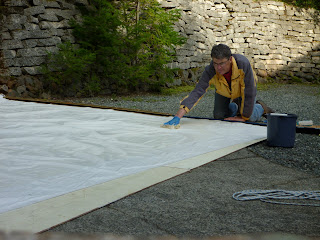 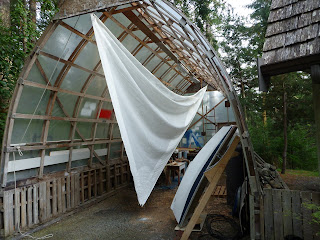 Posted by Mostly About Boats. at 8:33 PM