Thanks to Brett Hasbrouck, the General manager at Hayn Marine, and Robert Jones of Defender Marine, I received my replacement crown rings in the mail. Now it was time to get to work. Don Casey (This Old Boat) says a furler installation should take a professional rigger about six hours. 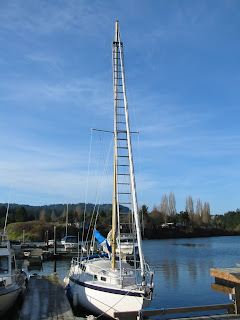 Rather than use a Bosun's chair, I rigged my ladder, as I did in this photo of the boat taken in 2005.

The first job was to make the new forestay from 7/32" 1x19 wire and the Hayn Hi-Mod swageless fittings. After bracing the mast the old stay was removed and stretched out between two screws driven into the deck.

An 'eye' fitting was attached to the top of the new wire, and a turnbuckle rod to the bottom, being very careful to get everything the same overall length as the original stay.

The Harken manual has a length calculation sheet that makes the whole process very easy.

To cut the wire I had thought about using my grinder with a cut-off wheel, but was reluctant to heat the wire ends, so instead  cut the wire to length by taping it, wedging it in a board with a 7/32" groove, and sawing through with a fine tooth bi-metal hacksaw blade. The job was easy and left a perfect, smooth cut in the wire.

Installing the fittings was very simple. I discovered that using a "Marrette" electrical connector was the easiest way to un-lay the outer strands without destroying what was left of my already shredded thumbnails. The yellow one fit perfectly! 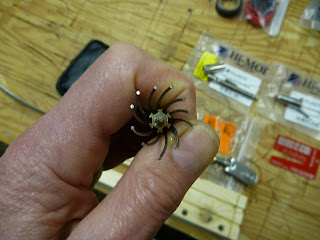 I like the Hayn Hi-Mod fittings because they have slots in the crown ring, preventing wire strands from getting into the groove in the center cone. I had to fiddle a bit to get two strands in each slot, but knowing they were perfectly spaced was worth the effort. Probably after doing a half dozen of them it would be much easier. Ah, the joys of being an amateur :-)
Another plus of the Hi-Mods is that all the pieces are reusable if they should ever be taken apart. 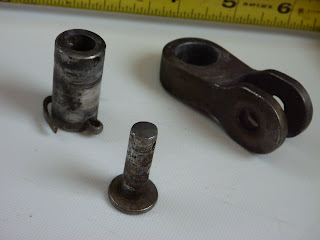 I removed the masthead toggle for inspection and discovered it was very heavily built when compared to the Schaefer Marine toggle I'd bought for the base of the stay. I had no qualms about enlarging the toggle pin hole for the stay from 5/16" to 3/8" to match the 'eye' fitting on the stay, and installing a new 3/8" pin.  The pin for the mast head end of the toggle is a massive piece of 3/4" tubing! I made the same modification on the masthead toggle for the backstay. 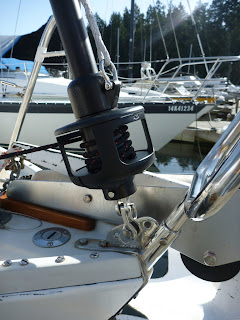 The bottom of the forestay is all 3/8" pins, as I had previously made a new, beefed up, stem fitting with 3/8" holes. Now everything on the stay is matching in size and strength. 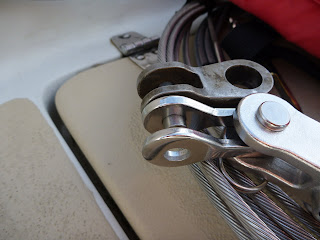 Here's a shot of the two toggles, side by side. The Schaefer is a standard eye-jaw toggle with a 3/8" pin. The Vega toggle, the upper one, when tapped with a screwdriver had a clear ring-tone like a fine wine glass ... good stuff!

Assembling the furler went pretty well, although I had some difficulty getting the sections together with the plastic wedges installed. Without the wedges they went together fine. The first two joints slid together with wedges OK, but the last joints were a bear. I'm not sure if the fact they were laying in the sun and had expanded made a difference, but I sure hope I never have to take them apart, as the supplied sealant was 3M5200!

After assembly I used the new jib halyard (a replacement for the old wire-rope halyard) to hoist up the top end of the rig, while the furling drum at the bottom slid along the dock on a life cushion.

Everything fit well, and after tightening the stays the furling line lead blocks were installed, a sail hoisted, and the furler 'dock' tested. Wow ... what a difference from the old unit. The exercise was well worth the effort !! 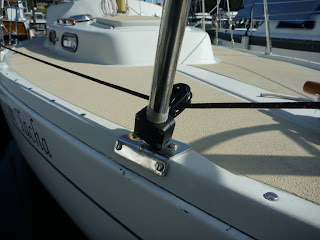 This is the forward lead block, going into the furling drum. I had to saw off a small bracket at the pulpit base to get the block low enough for the line to be at 90 degrees to the forestay. Ouch! 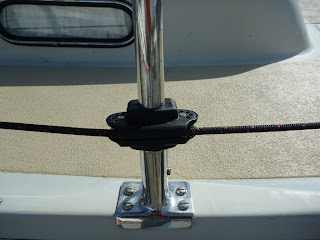 And a stanchion block that leads the line outside the stanchions. There are two of these. 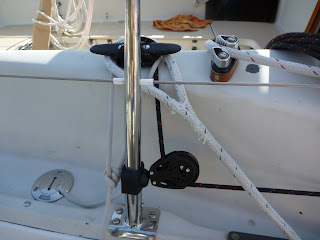 And a ratcheting turning block by the cockpit: 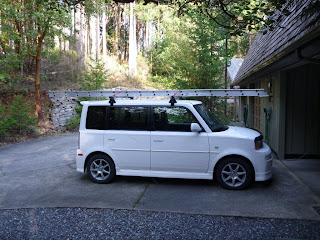 In spite of Don Casey's six hour time estimate, I managed to fiddle around for several days. They were very enjoyable days, and I feel confident the job is well done, but it was still a relief to say goodbye to the top of the mast and take the ladder home! Now it's time for a test sail :-)
Posted by Mostly About Boats. at 10:23 PM