(Click on pictures to enlarge.)
It seems I have become a two-boat owner again. While searching Craigslist the other day for boats for sale in this area an unbelievably 'cheap' boat showed up. Worse still, it was a make and model I have lusted after for a couple of years, an Albin Ballad. She's a 29' 11" cruiser/racer with fin keel and skeg-hung rudder with, in my eyes, drop-dead beautiful lines.

After initial inquiries, it turned out the boat had belonged to a sailor who had passed away a couple of years ago, and the boat had sat in the woods for five years. Yikes!! Before that she had been raced successfully in Vancouver, and had also made a return trip to Hawaii.

Still, I had to see her or I wouldn't sleep at night for wondering if she really was a real bargain. Arrangements were made to view, and we drove up to Nanaimo, caught the ferry across to Gabriola Island, and followed the directions that we'd been given.

Lo and behold, there she was parked on a muddy track, listing a bit to Starboard, covered with dead leaves and branches, and supported by many props, some looking pretty rotten. 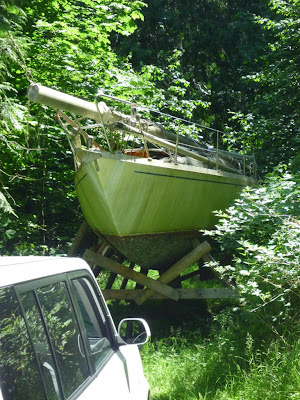 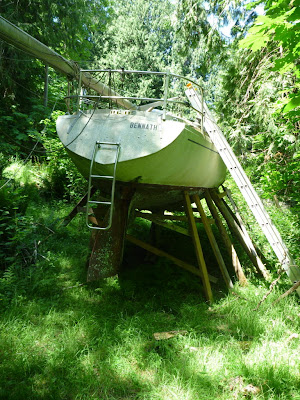 Clambering up a ladder into the cockpit, I discovered the cabin hatch was missing, and the boat was open to the weather. A peek inside showed a foot of water over the floor, lots of mold, and a sharp  musty smell. 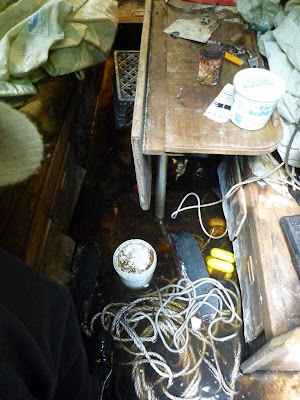 On went the coveralls and face mask, and in I went. The interior was crammed full of old gear, sails, lines, and other unidentifiable objects. It was not a pretty site. 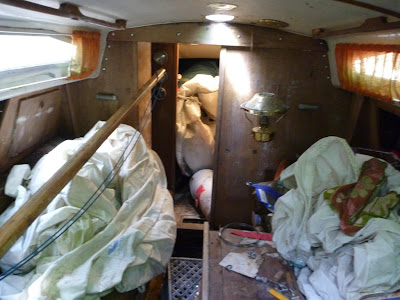 With great reluctance the engine cover finally yielded to show a not too rusty Yanmar 2GM20F sitting on it's mounts. A quick check showed it would still turn over by hand, but with no compression. Best of all, the "high tide line" inside the boat was below most of the engine. 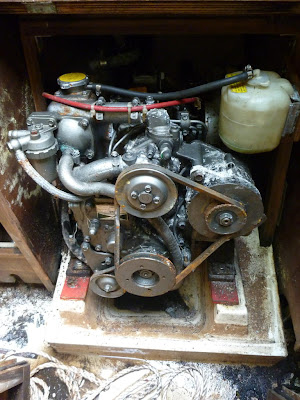 Back on top for another look showed decks that were badly stained by dead leaves and branches, with rigging and lines lying all over. The mast had been lowered abruptly, making a large bend in the pushpit, and distorting a short section of the luff rope slot. Cockpit lockers were held shut with rusty padlocks so no inventory could be made there. 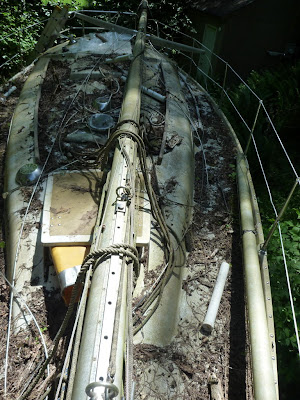 The topsides were covered in a coating of natures green growth, and below the water line the hull was decorated with a flaking coat of red anti-fouling.

But it was an Albin Ballad. And I knew they were built with the same quality as my Albin Vega, so the boat was worth rescuing.