The weather has been perfect and I had all my paint materials in hand, so there was no excuse not to get busy on the hull painting.
Using water-borne paint for the first time was a good reason to invest in a new spray gun.
This unit comes with three different sized nozzles,  allowing a wider range of paint types.

First up was to fill the myriad of small imperfections before spraying on the primer. The putty I used was very easy to apply, cured rapidly, and sanded easily. This operation took several days, as every time I thought I'd filled that last scratch a few more would become visible under a different light.

Next job was to wrap the trailer, cover the boat, and remove or cover anything that wasn't meant to be primed. 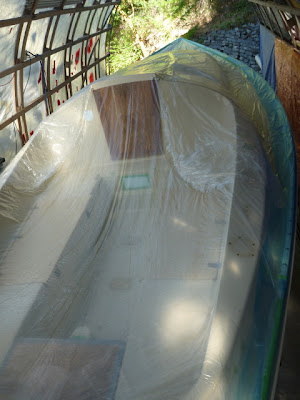 Work started by spraying the area below the waterline. As the final coat would be sanded, four coats in all were applied. 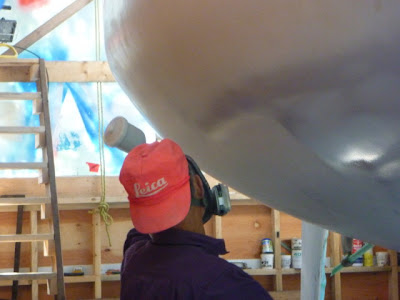 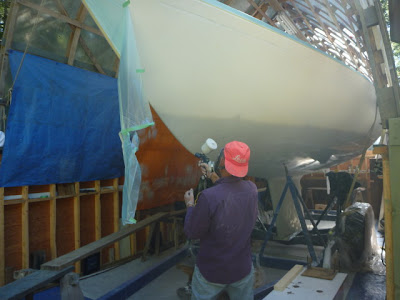 The System Three 2-part epoxy primer sprayed very easily, although while doing the work I wasn't happy with the narrow spray pattern from the new gun. A little detective work on my air system revealed some under-sized air lines, and when these were changed out to a larger size the difference was amazing.
Below the water line I wasn't concerned with a little "orange peel", but above the waterline a perfectly smooth surface was needed if I wanted a good paint job. Using a spray can of "Guide Coat" a light black fog was sprayed over the primer, just enough to make it look dirty. This would reveal where more sanding was needed to level out areas surrounding any low spots.
Next the waterline had to be accurately marked. Before I'd stripped the original bottom paint off I'd marked a few places with a small drill hole, later filled with brown epoxy. The most important marks were at the stem and under the counter at the centerline of the stern. Using an engineers level the trailer was leveled fore and aft so the two ends of the waterline were level with each other. Then a measuring tape was hung on either side amidships, and the trailer pads adjusted until the boat was level from side to side. A bit more fine tuning and it was time for the rotating laser!
The beam was a bit hard to see, and the level had to be moved several times, but by the time the line reached the stern it was within 1/16" of the rear waterline mark. Later I put a couple of short stainless screws at the stem and the stern waterlines for future reference.
The shed being fairly narrow, and the weather so nice, I decided to move the boat outside to spray the first coats of LPU on the topsides. A gangway was built around the boat at a convenient height, and I sprayed on the first two coats of paint.

The WR-LPU Linear Polyurethane Topcoat, made by System Three, is a water-borne paint. At first it was difficult for me to get good results, as I'm used to spraying solvent-based paints. Too dry (orange peel) then too wet (runs), but I finally got the results I was after by thinning a bit more and putting on lighter coats, almost like spraying lacquer. By the time I got 4 coats on the transom it was looking pretty good.
With results like that on the transom, I decided to let the sides cure and then wet sand them to remove my mistakes on the first 2 coats. Unfortunately by the time I was ready to do more painting the weather decided otherwise and jumped directly from summer to a wet, cool fall. So now it looks like the balance of painting will be done in the spring next year. Oh well, it's not as if there's nothing else to do on the boat!

Some notes on the paint:
Spraying with water-borne paint is a new experience for me. The primer was easy, but the topcoat is a challenge. I'm sure I can turn out a good job, it's just a matter of patience and practice. Even in cool damp weather it sets rapidly enough to spray multiple coats in a day. I'll probably wet sand and buff the final coat, so failure is not an option!

The beauty of being able to wash up and clean my equipment with warm water instead of lacquer thinner is a real plus, not to mention the far less toxic environment created by spraying a water-borne product.

One of my biggest problems, once the gray primer was covered with white, was to see where I had left off on the last stroke. It was almost like having snow blindness ... not enough overlap and you get dry spots, too much and you get a run. But this happens with any kind of paint.

Trying to paint in horizontal 6' sections without too much overlap it was difficult to avoid runs, so next round of painting I'll try top-to-bottom vertical strokes down the entire length of the boat in one go. I discovered I could fill my gun with water and "practice spray" the hull, and using this technique it was much easier to see where the 'paint' edge was.

So now I have to move on to other things. The bent mast must be addressed first. Winches need re-building, a thousand nuts and bolts covered in old sealant need cleaning, plumbing needs to be finished and wiring started, and the list goes on!