The following procedure is one I used to lower and raise the mast on my Albin Vega 27. Although the mast is only 30' long, it's quite a heavy piece of gear, and could cause damage and injury if it fell out of control.

I have recounted from memory of what I did two years ago. There may be some gaps, and there may be some changes needed for different boats. I found a slip clear of other boats and had an able helper.

Inspiration for my "A" frame comes from the Alberg 30 group post on the same subject.

The material for the "A" frame is from a Chain Link Fence supplier, and is 1 7/8" 14 gauge pipe. The nice thing about the fencing material is that each size will fit inside the next larger one, making it easy to sleeve pieces together. Also, it's galvanized for longevity.

I bought two 20' sections and cut them in half, sleeving them together with the next size smaller as inserts. Having them in two pieces made them a lot easier to transport. 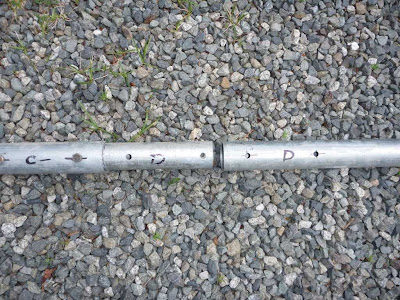 These were labeled, as my hole drilling was not exact and this way I can always get them to fit together! 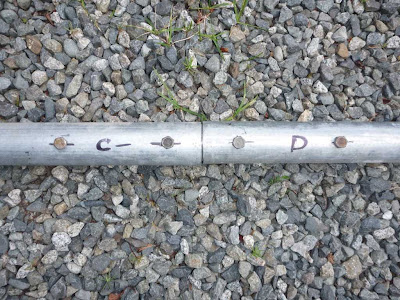 The tops were hammered flat 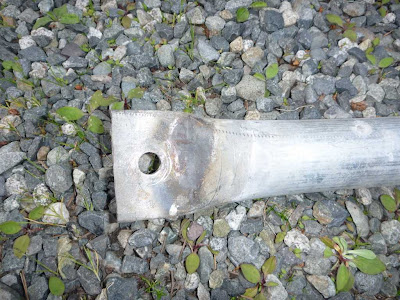 and bent over a bit (a little heat helped here) and a 1/2" hole drilled through both pieces. 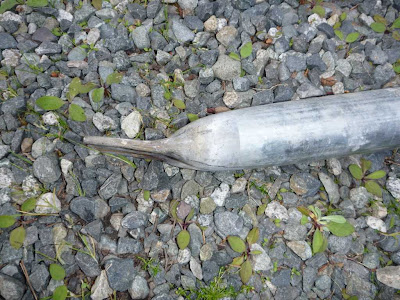 Electrical conduit caps were used on the ends of the feet to protect the deck. 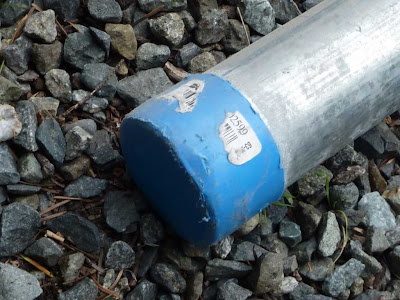 A piece of 1/4" plate, about 6" by 3", a 1/2" bolt, some spacers, and a couple of shackles for the fore and back stays made up the top piece. There is also a hole drilled at the bottom of the plate to hang the hoisting tackle. Later, a cleat was added to one of the legs, about 4' off the deck, so the tackle line could be tied off. 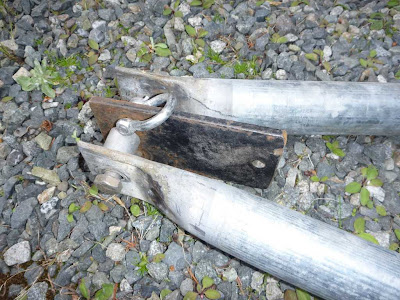 On my Albin Vega 27, with a 30' mast, I placed the "A" frame up against the forward side of the mast, tying off the bottom of the legs to the cap shroud chainplates. This gave the frame a slightly forward rake.

A fore guy and  aft guy were run to the bow and stern respectively, and tied off to something secure, in my case: the pullpit and the pushpit.

A rope  loop was run loosely around the mast and attached to the end of the tackle. (I used a four-part rig from an old mainsheet setup .... making sure to have enough line to fully lower the mast).

The loop was hoisted up until it was under the spreaders and holding the mast nice and snug.

After checking everything over carefully, it was time to loosen the shrouds, forestay, and backstay. (If you have a furler, extra care will be needed here to keep the foil from being bent. You may even want to remove the furling rig and substitute a temporary forestay before doing this procedure).

Hoisting on the tackle lifted the mast off it's step. As the mast wires run inside the mast, this was a good time to disconnect them, as well as the shrouds and stays. At this point the weight of the mast was being supported by the "A" frame, and being held upright by a willing helper at the base of the mast. On the Vega the spreaders are at the midpoint of the mast, so the whole rig was well balanced.

While one person slowly lowered the tackle, the other carefully walked the foot of the mast forward. By the time the foot of the mast reached the bow pulpit it was tilted at about 45 degrees. The mast was slowly lowered the rest of the way. On the Vega some type of temporary support was needed for the ends of the mast. I used a piece of lumber across the bow pulpit, and a wood frame on the pushpit, so that the mast sat about 6" above the cabin hatch top. A small block of wood mid way took the weight off the ends a bit.

Putting the mast up was  done by reversing the whole procedure.

Posted by Mostly About Boats. at 9:14 PM