BUILDING A DODGER (SPRAYHOOD) FROM SCRATCH: a general outline.


I've spent many happy hours in my basement sweat shop doing upholstery work, sail making, and canvas work on an old Pfaff 438 sewing machine. This machine does straight stitch and zig-zag, but has no walking foot, a feature that would be nice to have. But it will sew easily through 7 layers of heavy Dacron, and just as easily through 2 layers of light weight spinnaker cloth.

Several years ago I bought a Lancer 25. I'd never had a boat with a dodger, so thought it might be a good project to tackle. I've seen a few nice looking boats spoiled by ugly canvas work, so my aim was to combine grace with function, and finish with something that added to the boat's beauty, rather than detracting from it.

Armed with Don Casey's book, Canvas Work & Sail Repair, I studied the rudiments of dodger construction, and also built the tubing bender described in the book.

Like most new things I make, trial runs preceded the actual cutting of bought materials. The frame was mocked up from brazed together old electrical conduit, and inexpensive plastic hardware used to attach it to the boat. 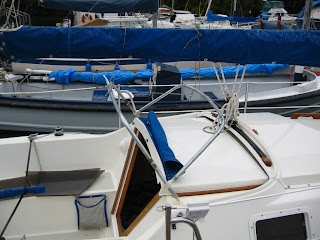 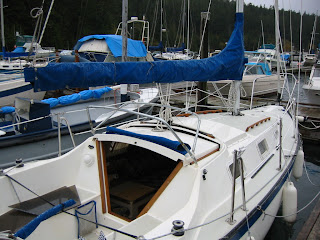 Once happy with the looks and function of the shape, it was time to mock up the cover. Many professionals use 6 mil poly, but I found a heavy craft paper worked better for me. Packing tape was the adhesive of choice, and it didn't take long before my "paper dodger" was a reality. 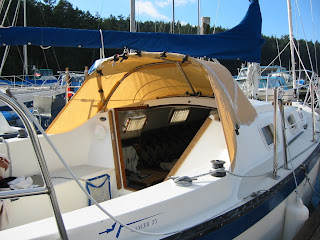 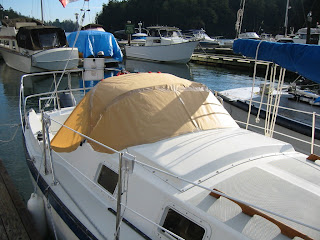 The paper can be creased, folded and taped to the desired shape. Neatness doesn't count here, just getting a tight, wrinkle-free form. Using a felt pen, the panel seams were outlined, as were the proposed windows. This whole paper mockup was then carefully lifted off the conduit frame and taken home to be cut up for patterns. 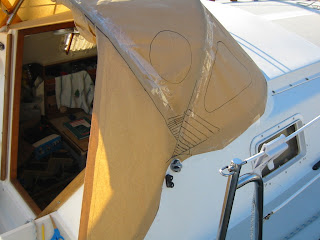 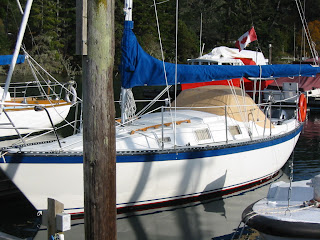 Still a little hesitant to start cutting up Sunbrella, an old canvas mattress cover volunteered to be of service to create a prototype ... it wasn't too pretty but the overall shape looked right (to me, anyway!) 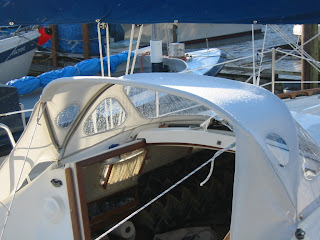 Next on the agenda was to bend the tubing. (I used 1" stainless steel tubing, but on my present boat I used 7/8" tubing, which was a lot easier to bend and certainly strong enough for a 27' boat.) The bender described in Don's book worked amazingly well. 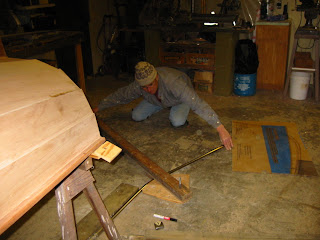 Drilling a hole in the concrete for the main pivot pin really helped to make it manageable. The plywood curve bending jig was also fastened to the floor. 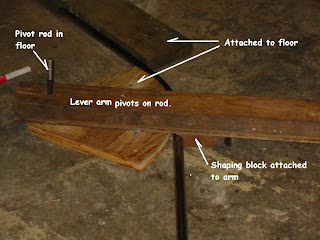 The tubes were filled with fine sand, tamped, and corked, to prevent kinking. 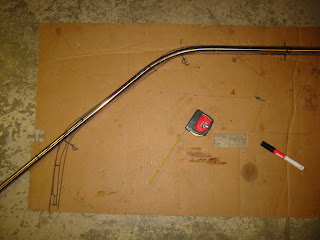 Tubes were greased to ease passage around the bending jig. 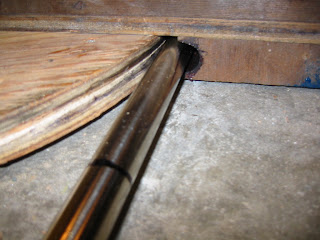 I laid out the patterns on the Sunbrella and duplicated the original canvas cover. The job was a lot neater and easier the second time around, having made a prototype first.

The Lancer had a nicely shaped combing across the hatch opening, just perfect for attaching the front of the canvas to. Unfortunately the traveler was attached right across this area. What were "they" thinking? An aluminum pipe 'horse' was built, and attached to the very sturdy hatch garage, to relocate the traveler about 4" forward of it's original position. 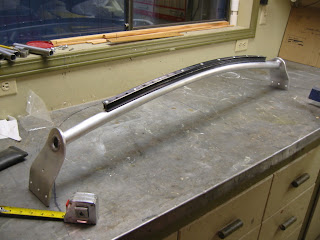 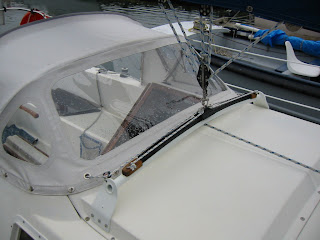 Grommets were installed to run the traveler lines through, and the mainsheet was re-routed forward along the boom, down the mast, and back over the center of the coach roof and through another grommet to a cam cleat. 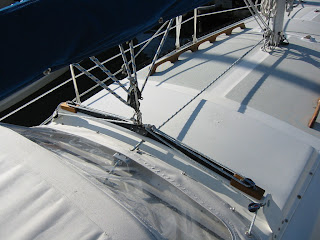 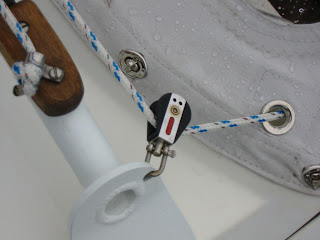 The whole process took many happy hours, and dozens of trips to the marina. I now look at other dodgers and have great admiration for the design and craftsmanship put into most of them. I can only hope to attain such a high standard, but in the meantime I can enjoy sailing in comfort and shelter :-)