WARNING: NOTHING TO DO WITH BOATS! - HOUSE CHIMNEY RE-LINE,

OK, the blog is called MOSTLY About Boats, but every now and then I like to throw in a project that may be of general interest.

We live in a home we built ourselves back in the early 80's. Our focus was on energy efficiency, using superior insulation, passive solar gain, solar assisted water heating, and a wood stove for warmth and hot water in the winter. (Our stove, an RSF HF-65, is a massive piece of ingeniously designed welded steel plate, complete with an electric thermostat damper control, 1" stainless steel water coil, and a catalytic combustor unit to reduce emissions.) We have reaped the benefit of these methods for the last 27 years. 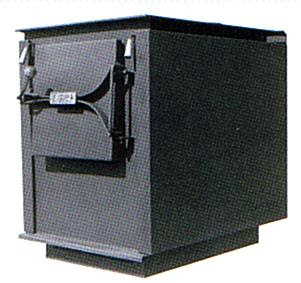 But in 2005 our three-storey masonry chimney, with tile flue liners, decided it had reached the end of it's lifetime, and thirty feet of liners collapsed onto the second level hearth slab.


In all fairness, we had a couple of chimney fires ... that we know about ... and the stove was usually lit in early November and extinguished in late March. I swept the chimney on a regular basis; at least once a month, usually more often.

The task of rebuilding the whole thing seemed daunting. Plus the routine of cutting wood, sweeping chimneys, emptying ashes, and all the related wood stove 'habits' was getting a little old, so the decision was made to install a modern heat pump. What a concept: heating AND cooling at the push of a button. (I will admit, here in the Pacific Northwest, the cooling season is seldom more than a week or two!) But we missed the magic feeling of a wood heated home, so this summer our project was to repair the old chimney, with the idea of using the woodstove in only the coldest weather and during the occasional power outage.

Before choosing a re-lining system the old rubble had to be cleared. Several days were spent on this fun task, leaning into the top of the chimney with a heavy iron bar on a long rope, bashing the rubble into smaller pieces that would fall through the 8" X 12" hole in the hearth and down into the basement portion of the chimney. Then the pieces had to be coaxed through a small cleanout door, sometimes needing a little re-sizing with a hammer before they would fit. On the top face of the basement chimney a hole was needed to access the remainder of the liner that still needed a nudge to come down. 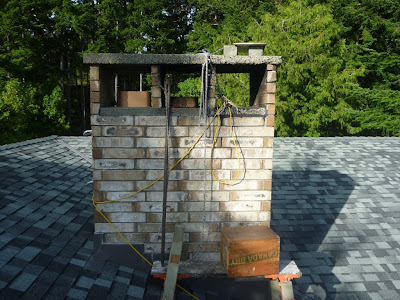 Now this is a really dusty job, both the old flu removal and bucking a hole in the concrete brick with a roto hammer. So I built a plastic tunnel, sealed against the chimney and leading to the basement door, to effect this part of the project. This worked really well, keeping all dust and debris out of the house ... well worth the day it took sewing the 6-mil plastic on my sailmaking machine! 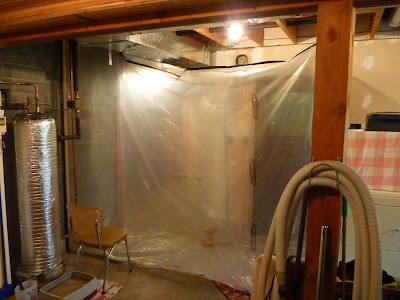 Looking down from the top it was evident that a rigid liner could be used, as it was a straight 28' 4" drop to the basement. Because the old liner was gone, a double-walled replacement was needed.

looking down from top, rubble all cleared 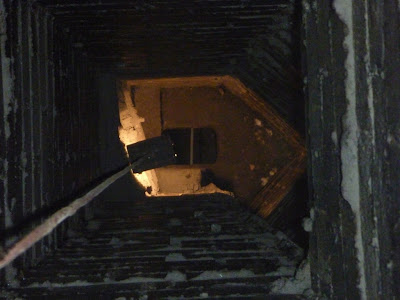 After several evenings on the Internet getting educated in chimney liner systems, I chose the Simpson Dura-Liner system, available locally. This is a stainless steel inner pipe, wrapped with insulation, set in a galvanized exterior casing 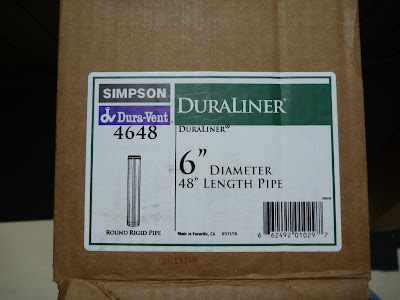 The pipes, in four foot lengths, are riveted together on site as each one is lowered down the hole. 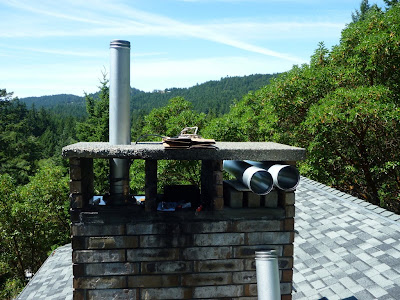 To do this, I cut a rectangular hole in the chimney cap. 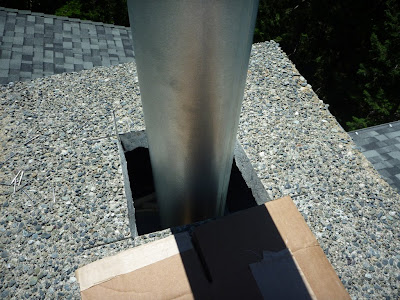 A line ( an old jib halyard) with a round plywood disk on the end was threaded up through the pipes as they were installed. This would allow me to recover the pipes if I accidentally dropped the whole works down the chimney, a distinct possibility as the weight increased with each pipe added. 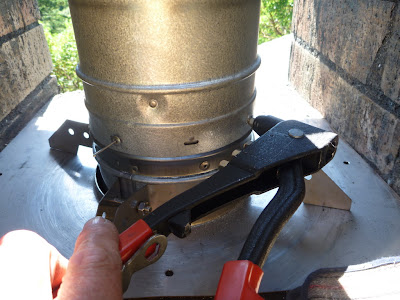 Once the seventh pipe was riveted on, the retaining clamp and rain cap were installed at the top. The system is designed so that the chimney hangs from the top retaining clamp which is supported by a stainless steel flange covering the chimney opening. I must admit, I wasn't too taken with the idea of the thing just hanging there by the top clamp. 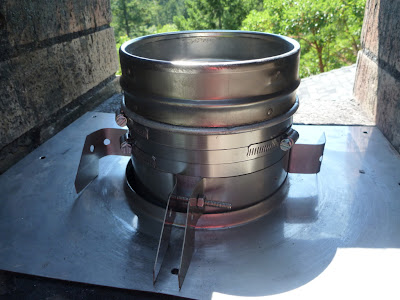 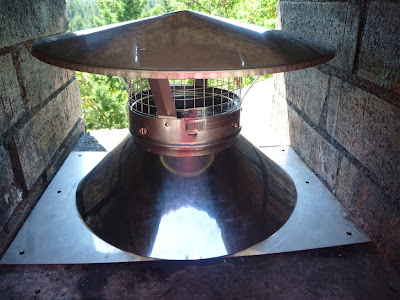 So, being a "belt AND suspenders" guy I decided to build a bracket to hold the bottom of the whole thing, preventing it from dropping more than an inch. It consists of a circular clamp around the lower part of  the bottom "T" fitting, suspended by two 1/2" threaded rods running right through the chimney walls in the basement.

clamp for bottom of "T" at base 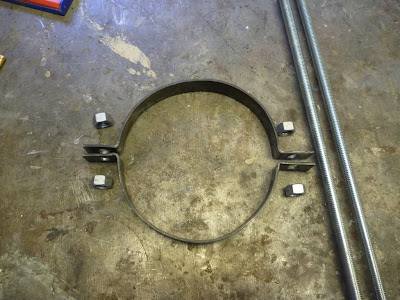 The clamp is not tight, and will allow the unit to contract in cold weather. Expansion, when heated, will simply poke the top portion up through the cap a bit. 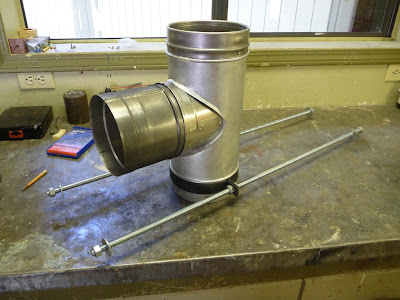 This design also addressed my other concern: if the free-hanging pipe contracted or expanded while held only from the top, the "T" fitting with the stove pipe thimble could be worked loose .... not a good thing. The way it is supported now holds the thimble from being disturbed. It also makes a more rigid structure, rather the a pendulum-type setup if only the top were held in place.

looking through work hole in basement at clamped-in "T' 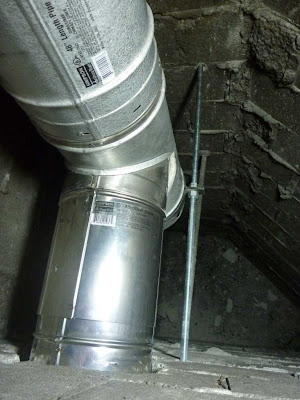 With the "T" installed, a hole was drilled for the stove thimble (more dust), the thimble installed, and mortared in.

thimble, and work hole above 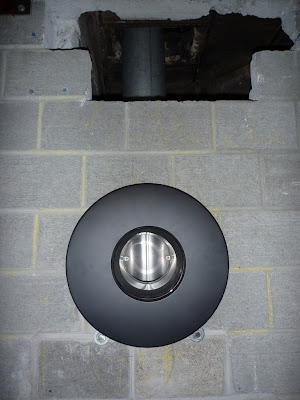 I added an 8" square cleanout at the back of the chimney, just below the "T", so the end cap can be removed for chimney sweeping. To keep the dust down I used a bag taped to the chimney wall ... worked well.


drilling hole at back of chimney for inspection cleanout door 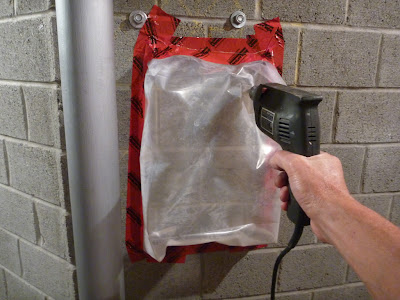 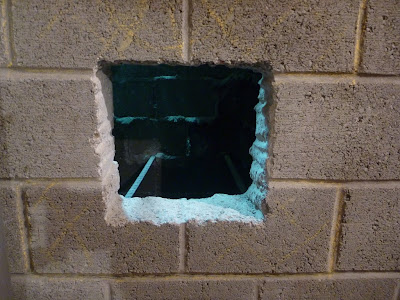 casting mortared in to new hole 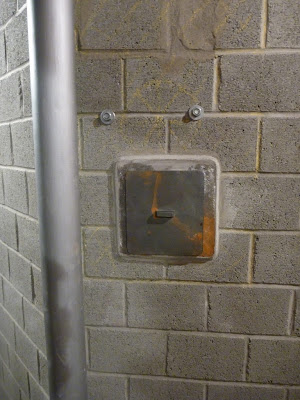 It's also a good spy hole to keep an eye on the thimble and support clamp assembly.


looking upward through cleanout hole at base of "T" and support 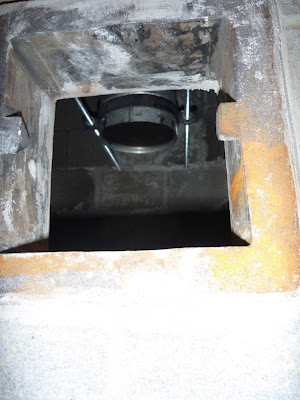 So now the job is finished, cleanup is done, and all that needs doing is to re-install the stove. 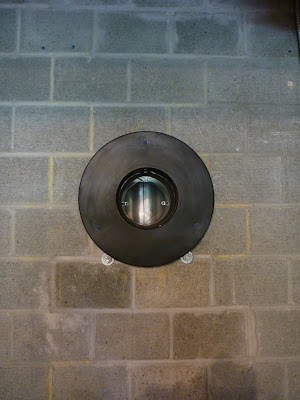 But before that can be done, the area around the stove needs to be fire-proofed and a new sprinkler system installed ... the old " belt and suspenders" approach again!
Posted by Mostly About Boats. at 10:47 PM